A recruitment company has taken the bold move of launching a fundraiser to help arm Ukraine in the horrific conflict against Vladimir Putin’s Russia.

Russia has invaded its neighboring country and several large cities have suffered bombing.

These actions prompted Jooble.org the job search engine to post a headline on its USA-based home page asking its users to supply funding for bullets, projectiles, and bombs.

There have already been civilian casualties, and horrifying images have emerged of those injured in cities like its capital Kyiv, which has come under heavy attack.

READ MORE: ARIZONA AIMING TO HIRE MORE VETERANS AS PART OF PLEDGE TO MAKE IT BEST STATE IN US FOR MILITARY STAFF

The has been universal condemnation of Putin’s behavior in the west, and now Jooble has added its voice to those protests.

A new message has appeared on its website urging people to pledge money to help arm people in Ukraine.

It says: “Support Ukraine during the Russian invasion. You can donate to the Ukrainian army through the official National Bank of Ukraine account” and has a link to the bank’s website. 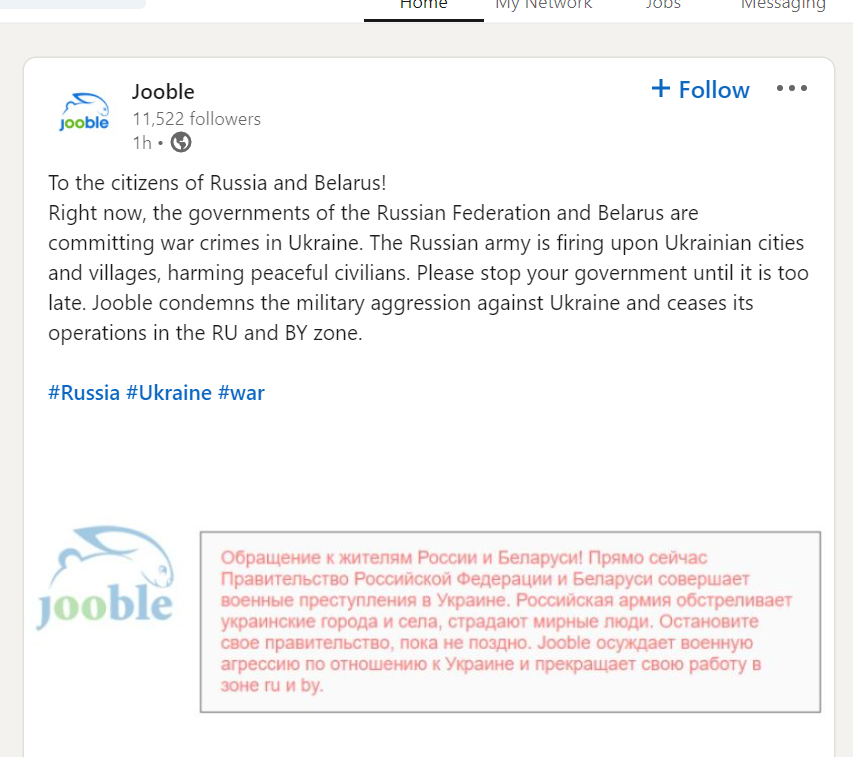 The home page for Jooble’s Russian website is urging people to donate cash to help the country fight Vladimir Putin.

Another Jooble message on its LinkedIn written in Russian and English, says: “To the citizens of Russia and Belarus!

“Right now, the governments of the Russian Federation and Belarus are committing war crimes in Ukraine.

“The Russian army is firing upon Ukrainian cities and villages, harming peaceful civilians.

“Please stop your government until it is too late.

“Jooble condemns the military aggression against Ukraine and ceases its operations in the RU and BY zone.”

The company initially set up a page allowing people to make donations through PayPal, but that has now been removed.

The strong response to the conflict is likely to be because Jooble is run by two Ukrainians.

Roman Prokofyev and Evgeniy Sobakarev started the company in 2006 and the company remains based in Ukraine, although internet traffic database Similarweb shows that the business sees 20% of its customers coming from Russia. Whatjobs Tips – Finding a job in the Isle of Wight